The US needs easy and streamlined citizenship for all

“But they broke the law!”

This plaintive cry is heard across the country, seen on message boards and facebook pages, vomited out over talk radio. It pushes a mindset that any sort of tyrannical government action against undocumented immigrants is justifiable. Any sort of violence, indignity, or moral outrage is acceptable, simply because “they’re here illegally”. It makes them an unperson, and history shows what countries do with people they consider unpersons. Slavery. Confinement. Deportation. Mass murder.

So, these ostensible “illegal immigrants” are here because “they broke the law”. What does that mean? Why does it matter? Let’s look briefly at the history of immigration law in America. Spoiler alert: It’s all racist. All of it. Here’s a timeline.

The very first naturalization law in the US limited citizenship to free white males. Nobody else could become a naturalized citizen. That was the law.

In 1830, the Indian Removal Act was passed by Congress, legalized the forced displacement of all Native Americans to west of the Mississippi. That was the law.

After the war with Mexico, when the US forcibly annexed large sections of Mexican land, they gave Mexicans living there the “option” to become citizens if they stay. But they only have rights to the land they owned if they could prove in US courts with US lawyers that they have those rights. That was the law.

In 1850, Congress passed the Fugitive Slave Law, which among other things allowed a black person to be enslaved simply on the testimony of a single white person that the black was already a slave, with no method for challenging this in court. That was the law.

Many Northern States and cities refused to enforce the Fugitive Slave Law, becoming sanctuary cities for escaping slaves. Slave State outrage at this defiance of the law was one of the reasons expressly and explicitly given for their secession and the subsequent American Civil War:


The faithless conduct of our adversaries is not confined to such acts as might aggrandize themselves or their section of the Union. They are content if they can only injure us. The Constitution declares that persons charged with crimes in one State and fleeing to another shall be delivered up on the demand of the executive authority of the State from which they may flee, to be tried in the jurisdiction where the crime was committed. It would appear difficult to employ language freer from ambiguity, yet for above twenty years the non-slave-holding States generally have wholly refused to deliver up to us persons charged with crimes affecting slave property. Our confederates, with punic faith, shield and give sanctuary to all criminals who seek to deprive us of this property or who use it to destroy us. This clause of the Constitution has no other sanction than their good faith; that is withheld from us; we are remediless in the Union; out of it we are remitted to the laws of nations.

After all, turning in "stolen property", escaped slaves, was the law.

Even after the Civil War when it became legal for African-Americans to become naturalized citizens, naturalization was still expressly forbidden for Asian immigrants. That was the law.

During this time, the immigration and naturalization process for European whites was simple. Get on a boat to America. Get off the boat. You’re a legal immigrant. You could not be a white illegal immigrant. That was the law. That’s how my family came here, in the 1680s, the 1740s, the 1830s. We just got off a boat. For years there were no laws limiting the immigration of white Europeans.

1882 is when the first immigration law is passed. It was the “Chinese Exclusion Act”, which prohibited Chinese immigration for 10 years. It was renewed, and remained law until 1943. No Chinese. That was the law.

The Immigration Act of 1917 established an “Asian Barred Zone” which expanded the prohibitions on Asian immigration to effectively encompass all Asians from southern and eastern Asia. Japan was excluded, as were the US territories in Guam and the Philippines. Included was everyone from Turkey to India to Thailand to Vietnam to Indonesia and more. They could not be legal immigrants. That was the law. 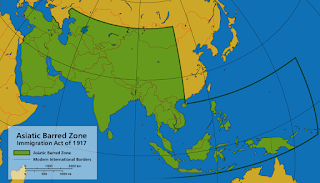 The Immigration Act of 1924 targeted eastern and central Europeans, placing strict quotas on immigration, in a reflection of the Eugenics-heavy legislative mindset at the time. These restrictions would over the next twenty years serve to keep European Jews fleeing the Holocaust locked out of the US. For example, the MS St. Louis was blocked from even docking at a US Port, and all of its 900 Jewish refugees were prohibited from entering the US, resulting in 254 of them dying in the Holocaust. That was the law.

In 1935 the Filipino Repatriation Act offered free transportation to Filipinos who would
return to the Philippines, and it restricted future immigration to the U.S. The Philippines were a US territory, won in the Spanish-American War, but the US didn’t want too many of those foreign Filipinos settling in the US. So a law was passed.

It wasn’t until the 50s and 60s that the old expressly racist immigration laws were repealed, and new more inclusive immigration laws put into place. But we have so much further to go. Let’s talk about the present and the future.

What Baby Boomers’ Retirement Means For the U.S. Economy


All else equal, fewer workers means less economic growth. One way to measure this is a figure known as the “dependency ratio,” or the number of people outside of working age (under 18 or over 64) per 100 adults between age 18 and 64.2 The higher the ratio, the worse the news: If more of the population is young or old that leaves fewer working-age people to support them and contribute to the economy.


POLITICS and sheer hatred aside, there is no shortage of blind spots in the rationale behind America’s mounting restrictions on immigration. Immigrants are a boon to America in many ways. For one, they do plenty of jobs that native-born Americans shun—including what most parents would agree is the ultimate labour of love: having babies.

For decades America’s birth rate has been stuck below the level at which a given generation replaces itself. This means that without a steady influx of young migrants down the line there will be fewer working-age people supporting a greater number of retirees. But according to analysis published earlier this week by the Pew Research Centre in Washington, DC, things would have been worse if it weren’t for immigrants. They make up 13% of the population but nearly a quarter of births in 2015 were to immigrant women.

The Obama Administration, for all its faults, put a lot of work into pointing out the advantages of streamliming a path to citizenship for the 11 million illegal immigrants already in the US. These arguments transition to a streamlined process for all immigrants.


As highlighted in the report, a range of economic research has shown that immigrants living and working in the United States without authorization are earning far less than their potential, paying much less in taxes, and contributing significantly less to the U.S. economy than they would if they were given the opportunity to gain legal status and earn U.S. citizenship. According to outside estimates, providing earned citizenship for these workers would increase their wages and, over 10 years, boost U.S. GDP by $1.4 trillion, increase total income for all Americans by $791 billion, generate $184 billion in additional state and federal tax revenue from currently undocumented immigrants, and add about 2 million jobs to the U.S. economy.

So, immigration laws have been historically racist. Trump is actively working to make them more racist. Their current enforcement is absolutely racist. But we need immigrants, badly. What we need to do is streamline the immigration and naturalization process dramatically.

Citizenship should be no more complicated than going to the courthouse, paying for a filing fee and background check, no more than $200, and after the background check goes through, they’re citizens. Just that simple.

If you’re worried about violent gangs like MS 13 or Mexican cartels taking advantage of this, end the drug war and stop destabilizing Central and South American governments. Easy fix.

The benefits of this would be huge:

The rights guaranteed by US citizenship should be natural and inalienable human rights anyway.

These are rights that we have championed all over the globe, whose praises the US has sung, authentically or not, hypocritically or not, since the signing of the Declaration of Independence.

It’s time to stand up to racism and to exploitation, and to embrace the idea of streamlined citizenship. Let’s make the United States as easy for the world to emigrate into as it was for centuries of Europeans.

And it’d finally put to rest the angry screams of “THEY’RE JUST ENFORCING THE LAW” and “ILLEGALS BROKE THE LAW”.

Posted by Anarcho-Cynicalist at 3:04 PM